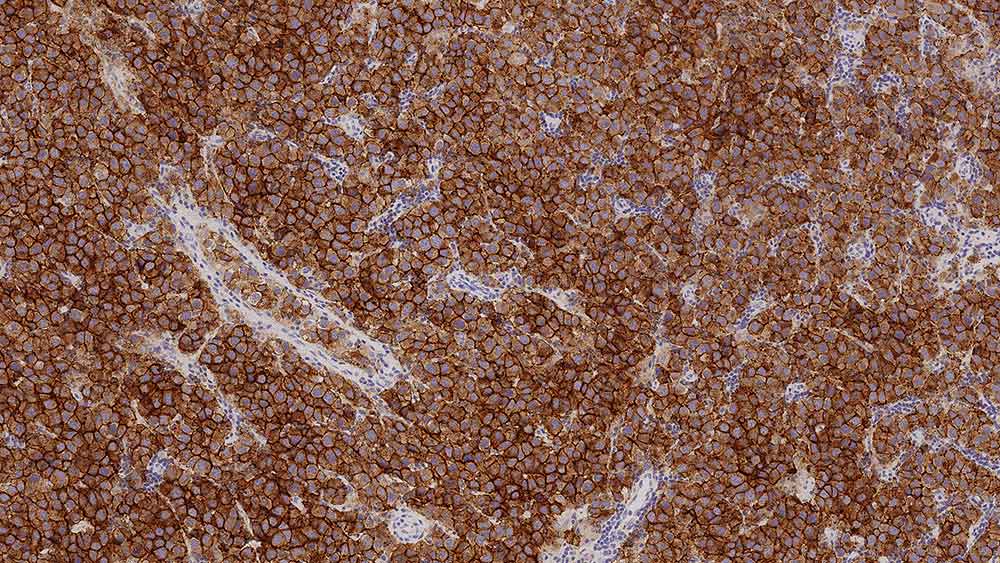 Placental alkaline phosphatase (PLAP) is a membrane-associated sialoglycoprotein enzyme normally present at high concentration in syncytiotrophoblasts within the placenta during the third trimester of gestation. The expression of PLAP was originally thought to be restricted to term placenta but a human PLAP-like variant has been described which shares more than 85% homology with PLAP itself. This high degree of homology between PLAP and PLAP-like enzyme together with cross-reacting antibodies has led to some confusion of the distribution of PLAP and PLAP-like enzyme in various tissues. PLAP is reported to be expressed only in normal term placenta, endocervix and fallopian tube and also in ovarian and proximal gastrointestinal tumors. PLAP expression is rare in malignant germ cell tumors. PLAP-like enzyme is reported to be predominantly found in normal fetal and neonatal testis, and in thymus. It is also commonly expressed in germ cell tumors and more recently described in seminomas.

Placental Alkaline Phosphatase is recommended for the detection of specific antigens of interest in normal and neoplastic tissues, as an adjunct to conventional histopathology using non-immunologic histochemical stains.