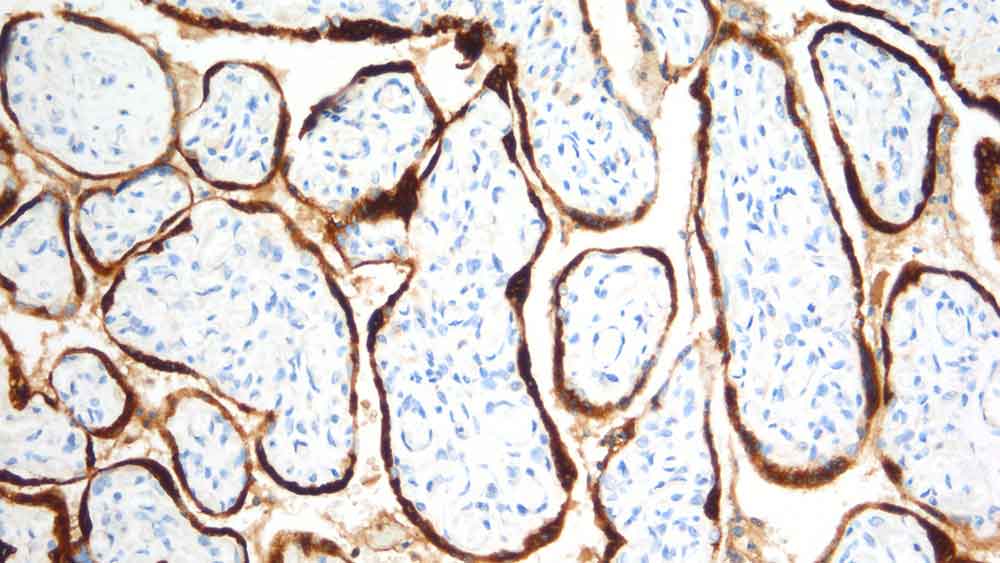 Human chorionic gonadotrophin (hCG) is a glycoprotein hormone produced by trophoblastic cells of the placenta beginning 10 to 12 days after conception. Maintenance of the fetus in the first trimester of pregnancy requires the production of hCG, which binds to the corpus luteum of the ovary which is stimulated to produce progesterone which in turn maintains the secretory endometrium. hCG is composed of two subunits, alpha and beta. The alpha subunit of hCG is identical to the subunit of luteinising hormone, thyroid stimulating hormone and follicle stimulating hormone. The common alpha chain and the hormone-specific beta chains have molecular weights of 14 kD and 17 kD, respectively. The hCG beta-subunit is unique in the family of beta-containing glycoprotein hormones in that it contains an extension of 29 amino acids at its COOH end. It is believed that the C-terminal region of the HCG-beta subunit plays a role in the intracellular behavior of the heterodimer.

HCGp was raised to the isolated beta-chain of human chorionic gonadotrophin and reacts with placental trophoblasts. HCGp shows a slight cross-reaction with luteinising hormone and may, therefore, stain basophil cells in the pituitary.

Human Chorionic Gonadotrophin (beta) is recommended for the detection of specific antigens of interest in normal and neoplastic tissues, as an adjunct to conventional histopathology using non-immunologic histochemical stains.

LOG IN to check your price,
or REQUEST a bulk quote.