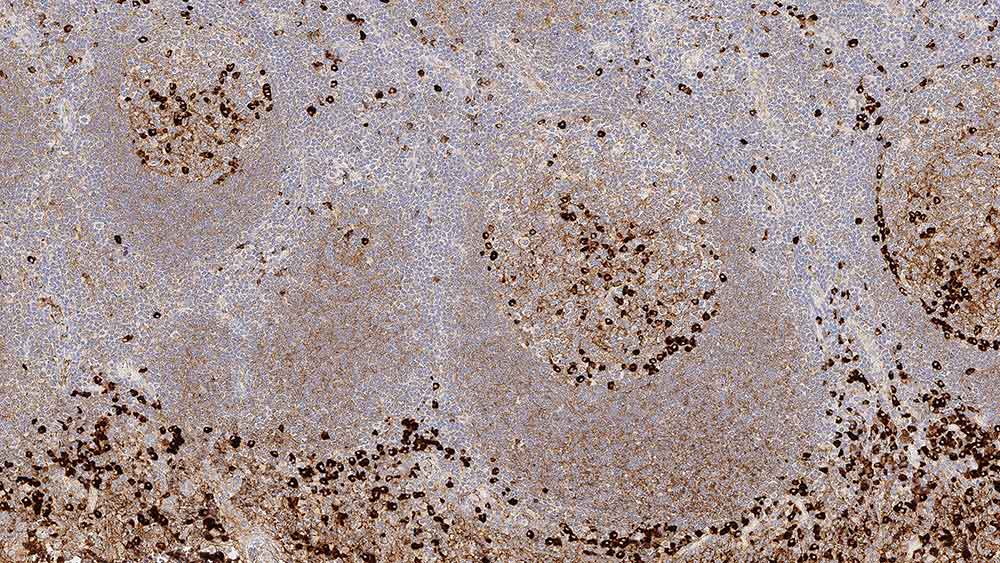 The human immunoglobulins consist of two identical heavy chains (~50 kD) and two identical light chains, which are linked together by disulphide bonds. The light chains can be either kappa or lambda. The five immunoglobulins IgA, IgD, IgE, IgG and IgM differ in their heavy chains, and IgA and IgM differ as they can occur in polymeric forms. The heavy chain of IgG is named the gamma-chain. In humans, IgG consists of four sub classes that differ only marginally in their amino acid composition. Antibodies to IgG have been reported to be useful in the identification of plasma cells, lymphoid cells containing IgG and classifying B cell derived neoplasms. The normal B cell population is polyclonal, expressing a range of different immunoglobulins. In contrast, the majority of B cell neoplasms are characterized by the proliferation of monoclonal cells expressing one type of light chain, whereas more than one type of heavy chain can be expressed by the same cell.

Disclaimer
Immunoglobulin G is recommended for the detection of specific antigens of interest in normal and neoplastic tissues, as an adjunct to conventional histopathology using non-immunologic histochemical stains.

If your country is not listed here, please contact us for more information.
Close
Contact Us for a quote.
VIEW DOCUMENTS
SPECIFICATIONS
RWP49
Hematopathology
BOND RTU
Yes
P (HIER)
Mono
Mouse
In Vitro Diagnostic Use
7ml