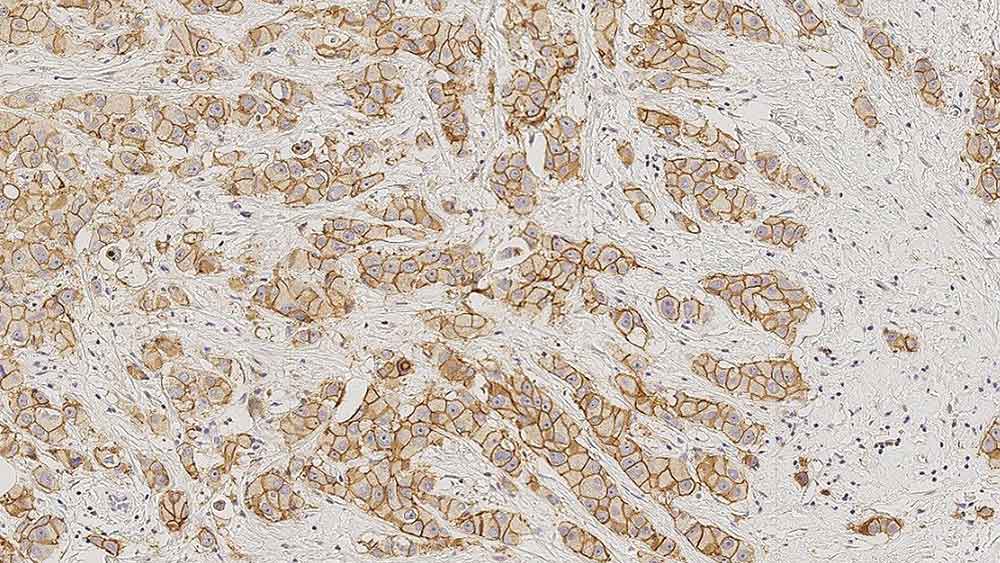 E-cadherin is a Ca2+-dependent, transmembrane cell adhesion molecule. It plays an important role in the growth, development and the intercellular adhesion of epithelial cells. Most tumors have an abnormal architecture and any subsequent loss of adhesiveness is thought to be an important step in the development of local invasion. E-cadherin may have a role in neoplastic progression, particularly as a suppressor of invasion. In prostate cancers, for example, the expression of E-cadherin is reported to be reduced or absent in comparison with its expression in normal prostate which is uniformly strong. Reduced expression or absence of E-cadherin in addition to alpha, beta and gamma-catenin in primary breast carcinomas has also been reported and these four proteins are associated with the development of metastases.

Disclaimer
E-Cadherin is recommended for the detection of specific antigens of interest in normal and neoplastic tissues, as an adjunct to conventional histopathology using non-immunologic histochemical stains.

If your country is not listed here, please contact us for more information.
Close
Contact Us for a quote.
VIEW DOCUMENTS
SPECIFICATIONS
36B5
Breast Pathology
BOND RTU
Yes
P (HIER)
Mono
Mouse
In Vitro Diagnostic Use
7ml