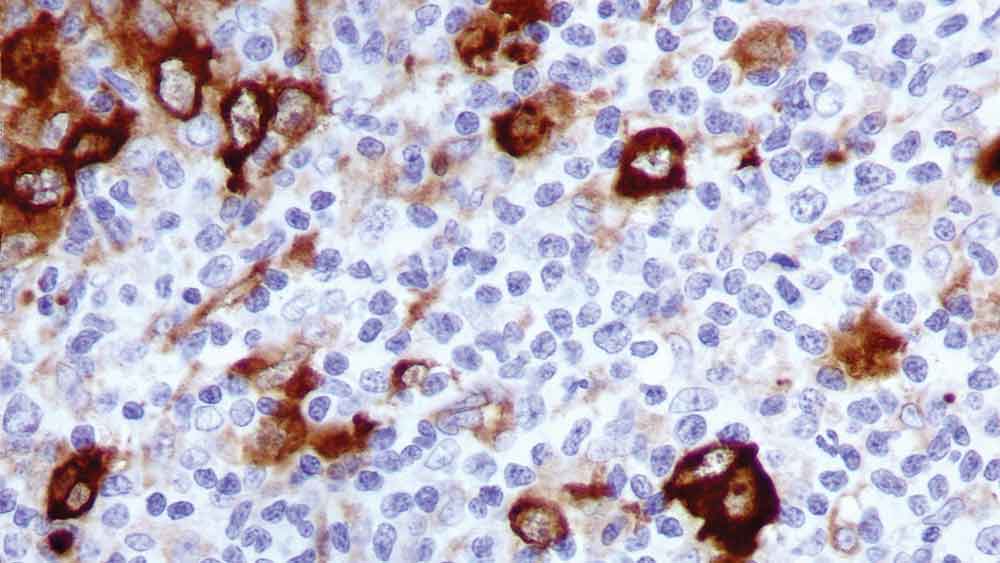 Human fascin is a 55 to 58 kD actin-bundling protein, whose actin binding ability is regulated by phosphorylation. In normal tissues the detection of fascin is reported to be predominantly restricted to dendritic cells, and in the thymus has been observed only in medullary dendritic cells. In reactive nodes, interdigitating reticulum cells of T cell zones, cells in subcapsular areas, and cells of the reticular network express fascin. Variable expression is seen in follicular dendritic cells and endothelial cells. Lymphoid cells, myeloid cells and plasma cells do not express fascin; however, in cases of Hodgkin's disease, including nodular sclerosis, mixed cellularity lymphocyte depletion and unclassified cases, most or all Reed Sternberg cells are reported to be positive for fascin. Fascin expression may be induced by Epstein-Barr virus (EBV) infection of B cells with the possibility that viral induction of fascin in lymphoid or other cell types must also be considered in EBV-positive cases.

Disclaimer
Fascin is recommended for the detection of specific antigens of interest in normal and neoplastic tissues, as an adjunct to conventional histopathology using non-immunologic histochemical stains.

If your country is not listed here, please contact us for more information.
Close
Contact Us for a quote.
VIEW DOCUMENTS
SPECIFICATIONS
IM20
Hematopathology
BOND RTU
No
P (HIER)
Mono
Mouse
In Vitro Diagnostic Use
7ml