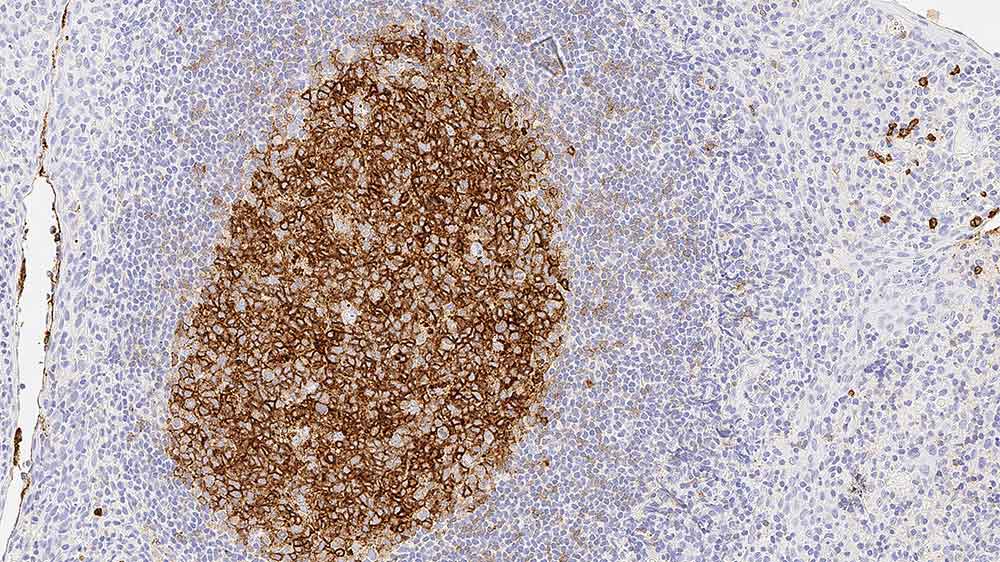 CD10 antigen, also called neprilysin, is a 100 kD cell surface metalloendopeptidase which inactivates a variety of biologically active peptides. It was initially identified as the common acute lymphoblastic leukemia antigen (CALLA) and was thought to be tumor-specific. Subsequent studies, however, have shown that CD10 antigen is expressed on the surface of a wide variety of normal and neoplastic cells. In other lymphoid malignancies, CD10 antigen is reported to be expressed on cells of lymphoblastic, Burkitt's and follicular lymphomas. CD10 antigen has been identified on the surface of normal early lymphoid progenitor cells, immature B cells within adult bone marrow and germinal center B cells within lymphoid tissue. It is also expressed in various non-lymphoid cells and tissues, such as breast myoepithelial cells, bile canaliculi, fibroblasts, with especially high expression on the brush border of kidney and gut epithelial cells. (G. McIntosh et al. American Journal of Pathology. 154(1): 77-82 (1999)).

CD10 is recommended for the detection of specific antigens of interest in normal and neoplastic tissues, as an adjunct to conventional histopathology using non-immunologic histochemical stains.

If your country is not listed here, please contact us for more information.
Close
Contact Us for a quote.
VIEW DOCUMENTS
SPECIFICATIONS
56C6
Hematopathology
BOND RTU
Yes
P (HIER)
Mono
Mouse
In Vitro Diagnostic Use
7ml