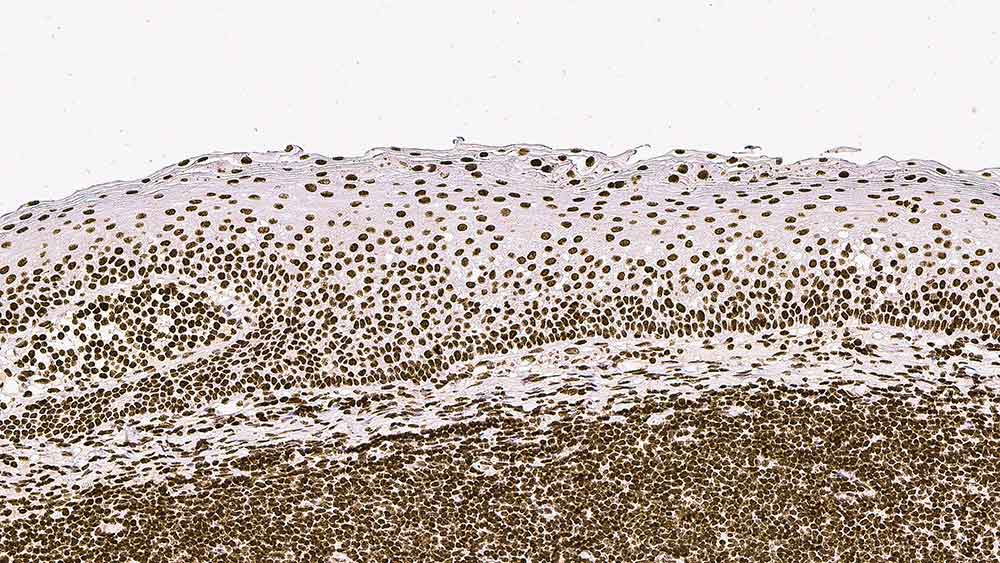 Topoisomerases are nuclear enzymes involved in a variety of cellular activities such as chromosomal condensation, DNA replication, transcription, recombination and segregation at mitosis. Human Topoisomerase I is a 100 kD protein capable of relaxing positively and negatively supercoiled DNA by performing a transient single-stranded nick which is then re-ligated at the end of the reaction. It has been shown that the enzyme is located in regions of the genome that are undergoing active RNA synthesis where it probably reduces superhelical stresses in the DNA enabling RNA polymerase to function properly. In normal eukaryotic cells, DNA topoisomerase I does not show relevant fluctuations across the cell cycle, unlike DNA topoisomerase II alpha. Both DNA topoisomerases I and II have been found to be targets of autoantibodies in the sera of individuals with certain autoimmune diseases, for example, systemic lupus erythematosus and also of some anti-tumor drugs and antibiotics. Elevated levels of DNA topoisomerase I, detected by 32P transfer assays, have been reported in colorectal tumors compared with normal colon mucosa as a result of increased transcription or mRNA stability.

Topoisomerase I is recommended for the detection of specific antigens of interest in normal and neoplastic tissues, as an adjunct to conventional histopathology using non-immunologic histochemical stains.