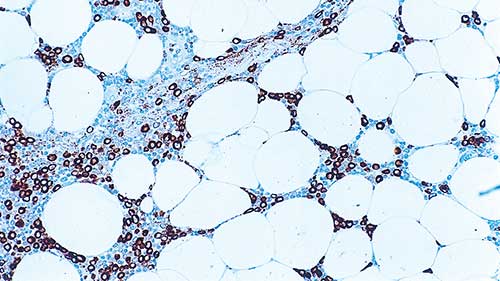 Myeloperoxidase is a lysosomal enzyme found in cells of the myeloid series which metabolizes most of the hydrogen peroxide generated by activated phagocytes. It is a major constituent of azurophilic cytoplasmic granules that uses hydrogen peroxide to oxidize a variety of aromatic compounds and chloride ions to hypochlorous acid (HOCI), a strong oxidant. HOCI is the most bacteriocidal oxidant known to be produced by neutrophils. HOCI reacts with proteins to form cytotoxic chloramines. Myeloperoxidase is reported to be a major component in all myeloid cells, including mature granulocytes and is a superior marker to myeloperoxidase mRNA, whose level decreases with the maturation of the cell and is not detectable from the myelocyte stage onwards. Myeloperoxidase is reported to be expressed in neutrophil granulocytes and monocytes in blood, in precursors of granulocytes in the bone marrow and in Kupffer cells of the liver.

Myeloperoxidase is recommended for the detection of specific antigens of interest in normal and neoplastic tissues, as an adjunct to conventional histopathology using non-immunologic histochemical stains.