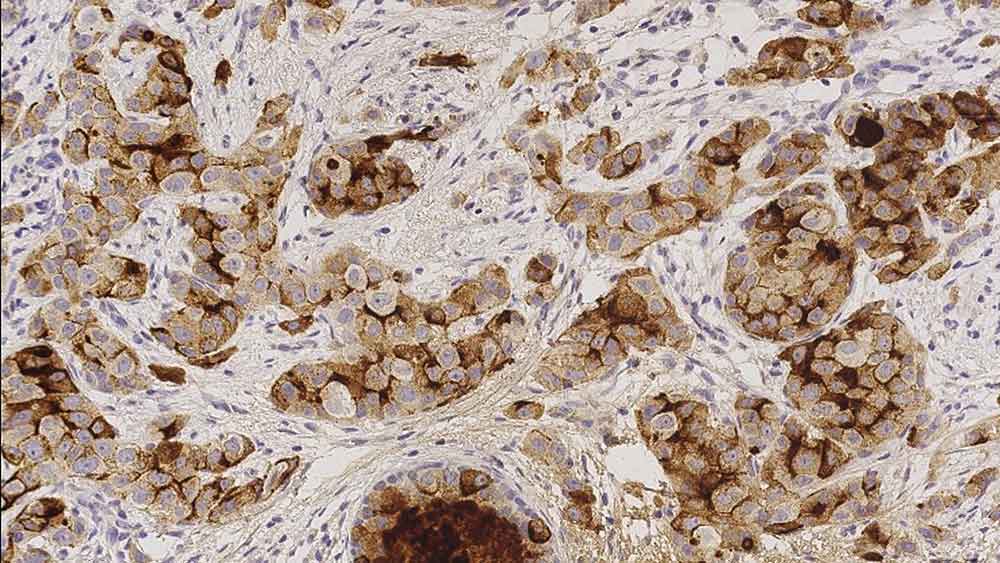 Gross cystic disease of the breast is a benign premenopausal disorder in which cysts are a predominant pathological lesion. These cysts appear to be formed from excessive apocrine cystic secretions. This fluid is composed of several glycoproteins including a unique 15 kD monomer protein, GCDFP15. It has been reported that cytosolic analysis of normal tissue from all major organs has demonstrated GCDFP15 in apocrine epithelia, lacrimal, ceruminous and Moll's glands and in numerous serous cells of the submandibular, tracheal, bronchial, sublingual and minor salivary glands. Cytosol from breast carcinoma lesions are reported to contain GCDFP15 at a wide range of concentrations. The concentration is reported to be highest in more differentiated carcinomas and GCDFP15 shows only a few positive individual epithelial cells within lobules and small ducts in normal breast. Expression has also been reported in fibroadenomas within areas of apocrine metaplasia.

Gross Cystic Disease Fluid Protein-15 is recommended for the detection of specific antigens of interest in normal and neoplastic tissues, as an adjunct to conventional histopathology using non-immunologic histochemical stains.

If your country is not listed here, please contact us for more information.
閉じる
Contact Us for a quote.
This item replaces PA0350
VIEW DOCUMENTS
製品仕様
This item replaces  PA0350
23A3
Breast Pathology
BOND RTU
Yes
P (HIER)
Mono
Mouse
In Vitro Diagnostic Use
7ml