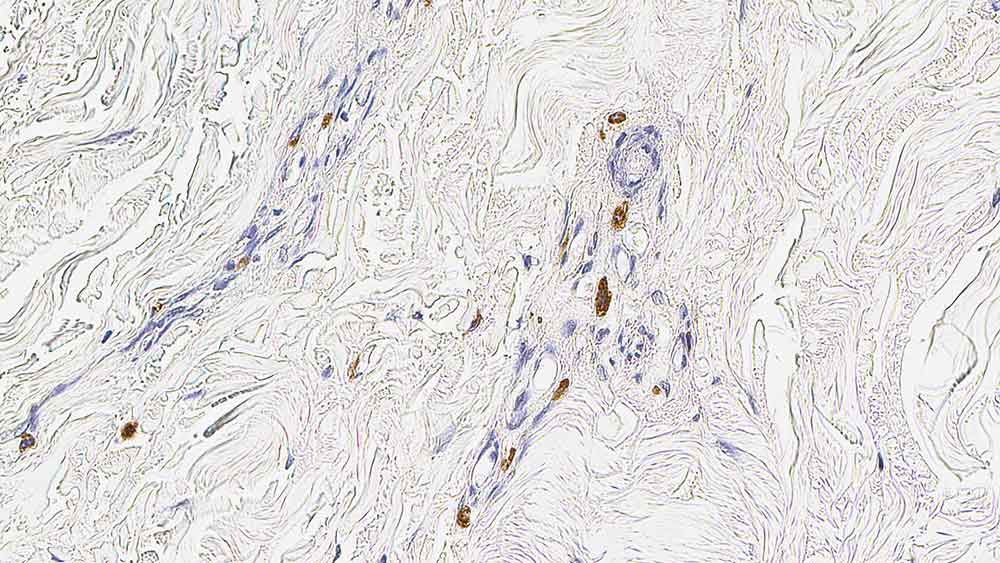 Mast cells contain a number of preformed chemical mediators such as histamine, chymase, carboxypeptidase and proteolytic tryptase. A substantial quantity of tryptase is reported to be found in mast cells of skin and lung and suggests this enzyme plays a major role in mast cell mediated events. In vitro studies indicate tryptase can cleave C3 to form C3a anaphylatoxin, inactivate fibrinogen as a coaguable substrate for thrombin and activate latent collagenase. Models of allergenic disease in the skin, nose and lung have each indicated elevated tryptase levels. Human mast cell tryptase has been reported to be implicated as a mediator of inflammation. Mast cell degranulation in the gut causes mucus secretion, mucosal edema, increased gut permeability and may be responsible for some of the symptoms and signs of inflammatory bowel disease.

Mast Cell Tryptase is recommended for the detection of specific antigens of interest in normal and neoplastic tissues, as an adjunct to conventional histopathology using non-immunologic histochemical stains.

If your country is not listed here, please contact us for more information.
Close
Contact Us for a quote.
VIEW DOCUMENTS
SPECIFICATIONS
10D11
Hematopathology
BOND RTU
No
P
Mono
Mouse
In Vitro Diagnostic Use
7ml