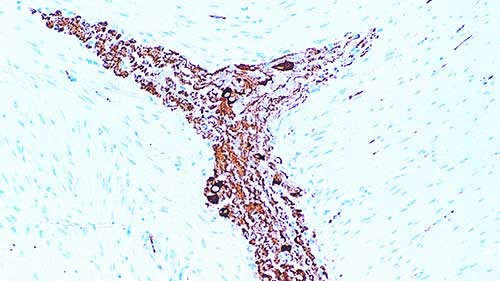 Antigen Background
Human nitric oxide synthases are a family of enzymes responsible for the synthesis of nitric oxide (NO) from L-arginine and molecular oxygen. There are at least three nitric oxide synthases; NOS-1, also known as neuronal NOS and nNOS, NOS-2, which is referred to as inducible NOS or iNOS, and NOS-3, also known as endothelial NOS or eNOS. As suggested by their nomenclature, these enzymes have different cellular distribution and are subjected to different regulatory mechanisms. NOS-3 is reported to be constitutively expressed and produces picomolar quantities of NO which play a role in signal transmission resulting in physiological effects. In the gastrointestinal tract, NO is reported to play a protective role where it has direct microbiocidal properties and acts as a first line of mucosal defence in the stomach. The function of NO in tumor development, promotion and progression is unclear. The effects may be both beneficial but also detrimental to those individuals with gastric cancer, where it is reported that NO supports tumor progression through the creation of neovasculature.

Disclaimer
Nitric Oxide Synthase 1 is recommended for the detection of specific antigens of interest in normal and neoplastic tissues, as an adjunct to conventional histopathology using non-immunologic histochemical stains.